Vandegrift High School and Four Points Middle School, in partnership with ZumaOffice.com, had another incredible holiday food drive supporting the Central Texas Food Bank. The 5th Annual event collected 2,757 lbs. of food for hungry Central Texans at a time when the food bank has an increased need for donations.

Since the food drive’s modest beginnings in 2012, over 11,000 pounds of food equaling 9,269 meals has been collected. Cliff Ellis, head coach of the Vandegrift High School Boys Basketball team, April Dang, team Mom, and Greg Pierce, founder of office supplies company ZumaOffice.com, came up with the idea for a food drive when Coach Ellis was looking for a way for the team to give back to the community. 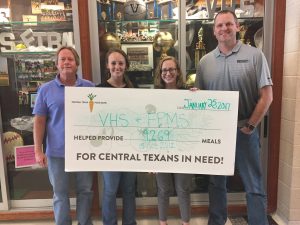 “That first year, we asked our fans coming to a game during the holidays to bring a food item, and we put a couple of bins around the school asking for donations,” said Coach Ellis. “What started as a few boxes of food donated that first year has mushroomed into about ten pallets of food being collected each year.”

The key to the food drives growth was including Four Points Middle School in the event in 2013. The efforts of FPMS, led by Coach Hope Todd, have been nothing short of amazing always accounting for over half of the total donations. The school uses friendly competition between the grades to encourage student donations, and the results speak for themselves.

Amy Elms, Community Events Coordinator with the Central Texas Food Bank recognized the achievements of the food drive with a recent photograph with the organizers. “We are always amazed at the donations that come to us each year from Vandegrift and Four Points with the coordination and logistics help from Zuma. It shows the giving spirit of the students and their families and is so appreciated by the CTFB.”